This morning on KFRU we talked a lot about beer. Craft Beer Cellar’s “Beer of the Month” program, some recent beers I’ve enjoyed – Calling IPA from Boulevard and Passionfruit Prussia from 4 Hands, specifically – and then Jonathan from CBC stopped in to surprise Simon with a box of selected beers. Renee and I played elves in setting that up. Then Jonathan sat down and we discussed some of the beers he’d brought in, Craft Beer Cellar’s offerings and the beer scene in general. It was great, but left us with less than five minutes to devote to some pretty significant news and updates regarding local restaurants. So here’s the rundown:

I stopped by the work-in-progress that is Wolf’s Head Tavern yesterday to see how progress was going. This, you may remember, is Trey Quinlan’s remodel of the Chim’s downtown spot into a Irish-themed pub built around a big bar and small plates. Trey, his brother Bowen and a third partner (Aaron?) were sitting on either side of the enormous bar taking what looked to be a well-earned break. If you were familiar with the previous decor, you’ll know they haven’t been taking many breaks over the last two months. Gone is the drop ceiling. Gone is most of the wood paneling on the walls. Gone, yes, is the fish tank. RIP fish tank. What’s left – and what is emerging – is an open, more airy space with exposed I-beams, brick and ductwork. It’ll have two big televisions behind the bar. It’s going to look pretty cool.

Trey says they’re on track for opening in two weeks or so, assuming permits and remaining interior work get done.

While the Trattoria Strada Nova/Red & Moe/Trey Bistro space has indeed seen more than its share of turnover over the years, 44 Canteen is poised to make it work. Here’s why. First, the – um – disagreeable longtime owner of the building is out. The building is now owned by Osama Yanis of Coffee Zone and he is not a crazy person/jerk. He definitely has an outsized personality but he’s been a downtown business-owner for decades, has been a genuinely good guy in my interactions with him and I think he’s going to be a supportive landlord. That’s big for any restaurant tenant. Second, 44 Canteen will be brought to you by Dave Faron and Mark Sulltrop of 44 Stone Public House, arguably the best restaurant in town. Not only do they know how to turn out good food they know how to stay in business. This is kind of important. 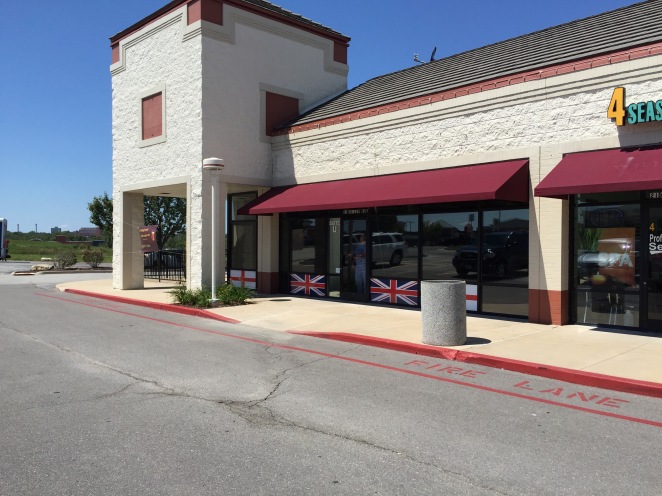 Up front it should be conceded that a strip mall formerly home to an El Maguey, a used book store and a laundromat is not an obvious location for an English-themed restaurant showing European soccer games on the weekends. Drop this concept downtown somewhere and we’d all be rapturous. Instead, it’s around the corner from the Conley Road Hy-Vee. It’s next to an “Aqueous Vapors” place or whatever. Still, I’m hopeful. Shepherd’s pie and bangers and mash are going to be on the menu. A look through the windows reveals lots of dark wood and old school lights over a long, sweeping bar so it should look the part. Also, parking won’t be an issue. So it has things going for it. It’s also not enormous so it will likely feel somewhat cozy. Owner Doug Marsden says the bar will seat 20, the dining area about 70 and another 30 can sit on the patio outside.

This place probably has the toughest row to hoe of the three. Still, best of luck…I’m excited to stop in for a game and grab a pint.

Updates on all three as I get them.